Copenhagen would like to become the world’s first CO2-neutral city by 2025. The cycling mentality in the Danish capital is exemplary in Europe.

Today each resident of Copenhagen produces 4.9 metric tons of CO2 per year, which is already 25 percent less than in 1990. For comparison: The average Dane emits twice as much. And the people of Copenhagen want to save further – by renovating buildings, relying more on renewable energies and using rain water. The promotion of buses and trains is also included in the planned measures. A new underground line is being built. 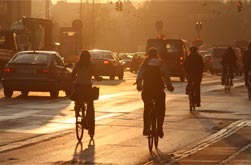 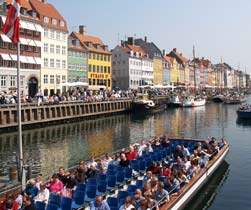 New living space in Nordhavnen
Copenhagen has 530,000 residents and the number is growing. So the city must also grow: Similar to Hamburg’s HafenCity, Copenhagen is developing Nordhavnen. In a large-scale project unique in Scandinavia, the Danes want to transform a fallow industrial dockland into a bustling residential and business area, with great importance paid to the sustainability of the buildings. The construction work is set to begin in 2011/12 on 200 hectares. 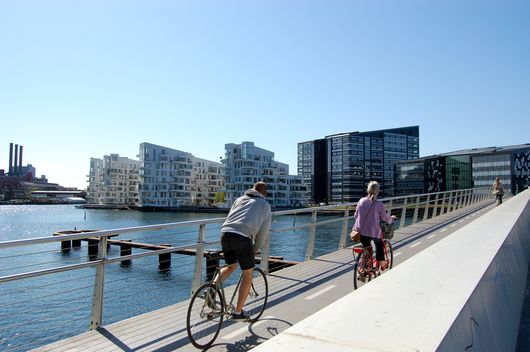 Copenhagen wants to become the world's first CO2 neutral city until 2025. This goal impressed us as much as Copenhagen's truely deserved reputation as cyclist's heaven!"

We know that 50% of all Copenhageners use their bike to get around in the city", says Jørgen Abdilgaard, Copenhagen's Executive Climate Project Director while he puts down his cycle helmet. Like many citizens he's commuting by bike. And he's sure that even more people would use a bike instead a car if only the infrastructure was better - although it's already extremely good if you compare it to Hamburg: All major roads have clearly marked lanes especially for pedal pusher and they are strictly separated from car and the extra bus lanes. And unlike in Hamburg pedestrians and cyclists don't have to share undefined sidewalks. But still Mr. Abdilgaard insits that some lanes should become even wider and the suburbs should get connected with the city via "cycyling fast lanes". There are plans for more bridges crossing the many canals of Copenhagen and many other ideas.

These measures are tiny parts of Copenhagen's very ambitious plan to reduce it's CO2 emissions dramatically within the next few years. All measures together would save about 1,5 out of 2,5 million tons CO2 Copenhagen was producing in 2005. The remaining ton should be compensated by promoting windmills. Therefore the city wants to invest in 200 megawatt wind energy. "We Copenhagener's remember very well the results of the UN Conference on Climate Change 2009 in Copenhagen", says Jørgen Abdigaard. "We have to stop talking and start acting. Solutions don't come from political leaders but from cities, from private initatives and from companies." Other measures taken by the city of Copenhagen are negotiations with the energy suppliers to replace coal by biomass. As unbelievable 98% of all buildings in the Danish Capital are connected to district heating this changeover would save a lot of carbon dioxide.

Well, the idea behind the Train of Ideas is to share ideas and best practice examples. And very obviously there is a lot Hamburg can learn from Copenhagen. So we are quite happy to hear that many experts and many citizens too replied exactly the same: Copenhagen can learn from Hamburg. A striking number of our 2.200 Danish visitors praised Hamburg's city bike that started in 2009. 15 years earlier Copenhagen was the first citiy to invent city bikes that can get picked up everywhere in the city. But obviously those bikes are very old now and many of them somehow disappeared. So people continously asked: "In Hamburg you have to register for the bike rental and they don't get stolen or damaged? We need this here as well!" I think this compliment really means something when it comes from people in the "City of Cyclists"! Other visitors where very interested in the presentation of Hamburg's HafenCity project - probably because it is kind of a role model for Copenhagen's similar waterfront project "Nordhavn".

So all in all I can say, is that the philosophy of exchange is clearly working! Not only among normal citizens but also among experts coming to our panel discussion we held in the marvellous Dansk Design Center. Another highlight was the visit of Danish and German experts invited by Hamburg's "Renewable Energy Cluster". It's always a benefit to have international and interdisciplinary exchange of ideas! So Copenhagen was a wonderful experience and after this first station abroad we are optimistic that our next stop in Scandinavia will be exciting as well: From May 1st to 4th we will stop in Malmö's Centralstation. So Goodbye Denmark and Hello Sweden!