Malmö – with solar power into a sustainable future

By 2020 Malmö wants to be an international model where sustainability is concerned. Just like Hamburg, Malmö is aiming to reduce greenhouse gases by at least 40 percent compared with 1990 levels.

To do this, Sweden’s third-largest city is investing in railways and cycle paths, would like to transport goods more by ferry and train and is relying on renewable energies. Starting in 2030 at the latest, all public buildings are to be supplied with energy from wind, sun or biomass.

The largest photovoltaic field in Scandinavia 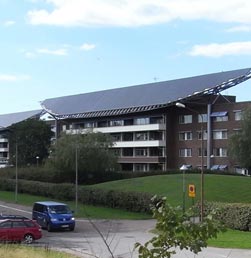 Already Malmö is the city with the largest area of solar panels in Sweden. More than 4,000 square meters with solar thermal collectors and 2,500 square meters with photovoltaic facilities collect solar power on schools, museums, industrial buildings and other premises. With this Malmö also supplies solar power to other regions of the country. The largest photovoltaic field in Scandinavia has been in Sege Park since 2007. The former hospital area today serves as an environmental workshop. There they actively work to solve climate and environmental problems.

The “Ekostaden Augustenborg” experiment is successful. The district that suffered from high unemployment has been transformed in the past decade into an attractive, multicultural neighborhood. The goal was to do it as sustainably as possible. The heating and warm-water systems were optimized, green areas were renewed and a recycling system was created. The special part of the project: The district’s residents were heavily involved in the planning and implementation. Hamburg is also currently upgrading a previously neglected district in the context of the International Building Exhibition IBA Hamburg. Wilhelmsburg will be the first CO2-free district in the Hanseatic City. 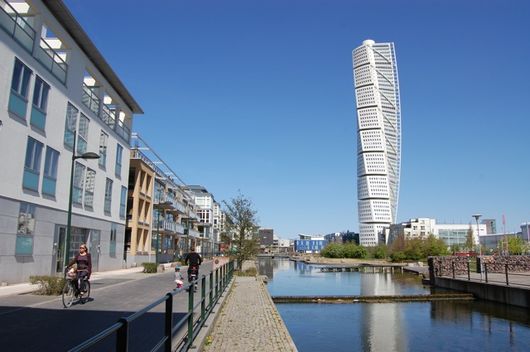 Building up future in Malmö

Turning Torso and a Residential Area in Västra HamnenMalmö has undergone a dramatic change - from Sweden's most industrialized city to a green and modern city that is steadily growing and comes up with a lot of excellent ideas in terms of sustainable urban planning.

It takes 30 minutes to understand what happened in Malmö. When you take the train from the Danish Capital Copenhagen to Malmö you cross the stunning Öresund Bridge (finished in 2000). And only 30 minutes later you enter the fantastic new railway station, that just recently opened in December 2010. This new underground construction turns the historic Centralstation (where our "Train of Ideas" stops now) from a terminal station to a highly efficient through station. Malmö's connection to Copenhagen's Airport and city centre is even better than from some outskirts of Copenhagen. So the merging of both cities to a common Öresund Region has a revitalising effect on Malmö.

Since its big economical crisis and the end of its traditional wharf and other industry, Malmö's economy and population have recovered. Today there about 300.000 people living in Malmö - which is 75.000 more than 20 years ago! Among those new citizens are a lot of Danish commuting daily between the two countries. And many of them life in Västra Hamnen (= Western Harbour) - a spectacular waterfront project that reminds me of Copenhagen's plans for their former harbour area Nordhavn and of course Hamburg's HafenCity. A lot of traditional harbour towns in Europe turn their old harbours into attractive new neighbourhoods - often with high standards in architecture, green housing technology and place shaping.

When Wilhelm Schulte, from Hamburg's Ministry for Environment and Urban Planning, visited Västra Hamnen he acknowledged that "it is a very lifely new neighbourhood with well working open spaces". Of course the new quarter has it's showcases and a landmark building designed by a star architect. In Malmö's case it's the Turning Torso by Santiago Calatrava. The 190 metre high residential and office building is Scandinavia's highest skyscraper and can be seen literally from everywhere in town. But also besides these "signature buildings" the whole area is obviously a well accepted and well-functioning new part of town. Main difference to Hamburg's HafenCity: Residential use is paramount. This is why it's lively all the time.

The first step in the development of the former wharf and industrial area into a sustainable neighbourhood was the ecologically orientated housing expostition Bo01 (Bomässan 2001). This Bo01 development has led to a distinctive, resource efficient and liveable place with 500 homes, commercial and community facilities. It's one of three best practice examples from Malmö we present on the Train of Ideas.

But cities in Europe cannot only learn from this succesful conversion of a former harbour area, or the ecological renovation of a traditional working class area (Ekostaden Augustenborg) and from the project Sege Park, a residential area with Sweden's largest photovoltaic facility. These ecological dwelling projects are part of Malmö's great aims to become climate neutral by 2020 and using only renewable energy from 2030 onwards! So Malmö, which turned from "Sweden's most industrializd city to Sweden's least industrialized city and from a city with crumpy population to a city with with happy people" (quote from Anders Rasmus, Malmö's Commissioner for Housing and Infrastructure) is really building up future!