By 2050 the residents of Zurich want to reduce their power consumption per capita to 2,000 watts. This goal is so important to them that they have embedded it in their city’s constitution. 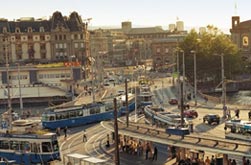 Per inhabitant from 5,000 to 2,000 watts of energy and from 5.5 metric tons to 1 metric ton of CO2 – by 2050 at the latest. The climate concept of the Swiss Federal Institute of Technology Zurich explains how this can succeed: through efficient technologies, economical handling of resources and renewable energies. Hamburg is pursuing a similar approach: By 2050 CO2 emissions are to have dropped in the Hanseatic City by around 80 percent compared to 1990 levels. 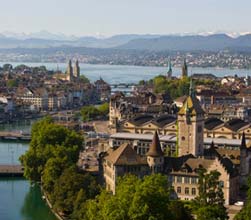 Eco-friendly homes for everybody

In 2008 76 percent of Zurich voters decided in a referendum to embed the goal of the 2,000-watt society in the city’s constitution. In order to achieve the watt reduction, Switzerland’s largest city is emphasizing eco-friendly dwellings for everyone. On a 40,000-square-meter industrial area, eco-friendly, yet affordable housing is being developed. After completion, the new district will offer approximately 1,000 people space for living and working.

Bus and train travel to be promoted – not car driving

Nearly 80 percent of all journeys within Zurich’s city limits are made by foot, bike or public transportation. With its mobility strategy the city is promoting the expansion of local public transportation, like Hamburg and other European cities. Bike and footpaths are also being expanded. Driving a car, however, is expensive in the downtown area. Hard-to-come-by parking spots subject to a charge are intended to stimulate the change to buses and trains. Taking a deep breath in Zurich

Many European cities have ambitious aims for their climate politic. But Zurich has also very precise ideas of how to achieve this goals - and has taken a deep breath before starting the project.

Switzerland is popular for its direct democrazy via plebiscites – a political instrument sometimes under suspicion to be good only for saying „No“. But he citizens of Zurich said "Yes" to a far reaching project: Changing the city into a "2.000 watt society". Presently the 380.000 inhabitants consume an average amount of energy of 5.000 watt. Until 2050 the people want to reduce their yearly consumption to 2.000 watt per capita - a number that matches the per capita consumption in the world today. So rich Zurich wants to temper its appetite for energy to the modest average of developing and developed countries.

Several measures have already been taken to reach this number. For instance by increasing energy efficiency in buildings: So far more than 50% of all energy is used for housing. Now most new buildings in Zurich are constructed energy efficiently following the Swiss standard for green buildings, called Minergie. 54% of all new houses are Minergie houses nowadays. In the brownfield area Manegg passive houses for 1.000 people get build.

"The city's have the responsibility for the world climate" said Zurich's Mayor Corine Mauch last Friday when she opened the Train of Ideas together with German Ambassador Axel Berg and Hamburg's State Secretary Holger Lange.But she reminded that cities do not only consume most of the world's resources but that cities also host some of the most innovative research centers and companies. No wonder that the concept for the 2.000 watt society was evolved by the worldwide renowned university ETH Zürich.

Another important field for saving energy is traffic and mobility. Prof. Jürg Dietiker from the University of Applied Sciences, ZHAW, said at the Green Capital Challenge (the discussion panel organized for the stay of the Train Of Ideas in Zurich): "Our roads are full. And rare goods have a price. So driving cars in the city has to be expensive. High parking fees and road pricing are good regulating screws for the city of Zurich."

This is partly done already in the biggest city of Switzerland. "We need sanctions for car drivers", explained Prof. Dietiker, "but we also need stimuli for promoting alternative means of transport." And Zurich is doing so: The excellent public transport system is getting expanded (e.g. a new S-Bahn is being build) and going by bike and by foot is made more and more attractive. For instance due to huge parking garages for bicycles at the Central Station - from where the exemplary swiss train connections to most major cities and suburbs is offered. Some of our visitors came by train from the capital Bern, which is a less-then-one-hour-ride - surprisingly offered every half hour!