The Munich region attracts many people and will continue to grow. The Bavarian state capital is reacting with sustainable urban expansion, the development of renewable energies and the promotion of transportation by bike, among other things.

At the western outskirts of Munich, the residential and trade area Freiham is to be created with energy-efficient dwellings for 20,000 people in the coming years. At the same time, the city is developing a renewal strategy for neighboring Neuaubing for its housing from the 1960s. Both districts are to receive their heating energy in the future from a geothermal heating station in combination with eco-friendly long-distance heating. The joint energy-efficient development of Freiham and Neuaubing should not “only” be energy-efficient, but also take into account economic and social aspects.
The International Building Exhibition (IBA) Hamburg is also developing trend-setting ideas and showing how the peripheral areas of large cities can be used for sustainable expansion. 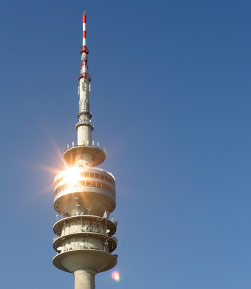 Munich is also advancing the development of renewable energies. By 2025 Munich’s department of works (SWM) wants to produce enough eco-power in its own plants to cover the entire city’s consumption – that’s 7.5 billion kilowatt-hours per year. This will make Munich the world’s first city of a million residents to achieve this ambitious climate target. To do this, SWM has launched the successful Renewable Energies development offensive. As soon as all the projects underway so far are complete, SWM will be able to supply approximately 2.4 billion kilowatt-hours of eco-power – enough for all 800,000 Munich households as well as the underground and streetcars. 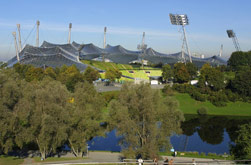 The roofs of the state capital are also aiding climate protection: The Munich solar initiative, whose shareholders include the city as well as SWM, seeks to increase the maximum performance of the city’s photovoltaic plants by 2030 from their current 20 to more than 300 megawatts. Then some 15 percent of households could be supplied by solar power. 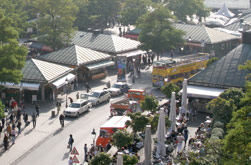 Another important energy source for Munich is its muscle power. The Bavarian metropolis is the bike-friendliest city in Germany, and last year under the slogan “Bike Capital Munich” it launched a comprehensive campaign to increase bicycle traffic by another 20 percent by 2015.

Back in Germany after five weeks in Scandinavia and Switzerland. But Munich turned out to be even more different than the previous stations abroad.

The capital of Bavaria welcomed us with open arms and offered us one of its most attrative places in the heart of the city: our Train of Ideas was allowed to locate on the Odeonsplatz between the General's Hall (Feldherrnhalle) and Court Garden (Hofgarten). When we reached this historic spot we were enchanted – and got even more delighted when we saw all the TV stations with their broadcasting vans and dozens of police men and security. Hey, obviously our Train of Ideas is real big thing in Munich!

But than a Lady interrupted our speculations and showed us a yellow paper, saying that the Swedish Crown Princess Victoria was in town visiting the Hofgarten. So all the effort was taken for her, not for us! Well, you can’t have it all...

Nevertheless Munich turned out to be very succesful for us. And we like to emphasize that this was made possible by the municipality. Especially for the stop of our Train Munich organized a very attractive and informative day of action with some twenty booth and tents from environmental NGO's, the German Bicycle Association (ADFC) and many others. So hundreds of school kids came by combining their visit of the city’s action day and our exhibition. It was really great to guide so many students through our Train!

And there was a real big number of very well informed and interested adults as well. Many of them were very familar with renewable energy and were interested in Hamburg as a cluster for companies and research centers working in this field. But they made also very clear that Munich and Bavaria are much more into other alternative energy sources. So obviously the sunny south of Germany was not so impressed by our wind mill expertise way up north... The Bavarians took some pride in their "Solarintiative München" which is promoting photovoltaics on private roofs.

And they also mentioned often the "Praterkraftwerk", a recently opened, underground (!) hydro-electric power plant in the river Isar run by the city's public utility company (SWM). This new plant combined with older hydro power plants, new photovoltaics, planned geothermics is taking part in the "Ausbauinitiative Erneuerbare Energien" (= Development Initiative Renewable Energy). This municipal initiative aims to deliver all 800.000 private households in Munich with "green energy" until 2015! Munich with its 1,3 million inhabitants is about to become the world's first megacity to achieve this fabulous goal - but I have to add, that some of Munich's green energy is not getting produced in the south but from wind mills in northern germany!