Poland is still struggling with the environmental omissions of the past, in particular in the areas of waste, wastewater and air. The capital Warsaw is actively tackling these challenges. 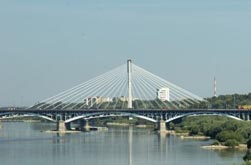 Warsaw is so far the only city in Poland with a waste incineration plant. This plant is to be expanded in the next few years. It currently manages approximately 70,000 metric tons annually, which is scarcely ten percent of the capital’s garbage output. After modernization the plant will turn four to five times as much waste as before into energy. 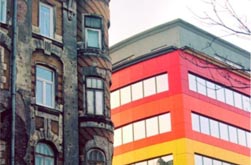 In order to reduce the quantity of recyclable waste in landfills, the city is informing its citizens about garbage separation through the “Recycling Days” campaign. The people of Warsaw are also being asked to replace old electronic devices with new energy-saving models – and to dispose of old ones in an environmentally conscious way.

Warsaw’s sewage purification plant Czajka has already been modernized. Instead of 200,000 cubic meters of wastewater like before, the plant now manages 435,000 cubic meters per day. Before the expansion, less than 50 percent of urban wastewater was cleaned in a purification plant. The rest flowed untreated directly into the river Vistula or into the ground. The expanded sewage purification plant substantially improved the environmental situation in Warsaw and in the river Vistula and also reduced pollution in the Baltic Sea. 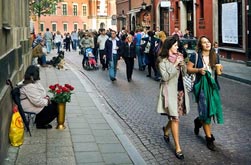 Warsaw wants to lower CO2 emissions by expanding local public transportation among other things. The city is creating “Park & Ride” areas next to underground stations, developing bus lanes and recruiting for carpooling. 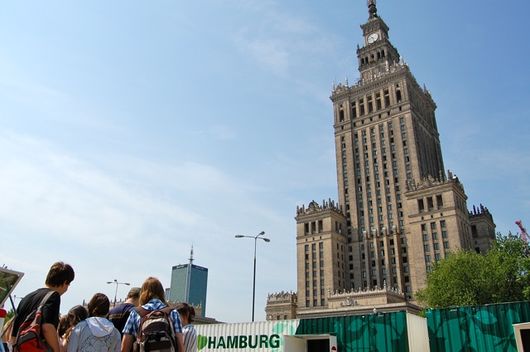 The basic idea behind sending the Train of Ideas through European’s major cities is learning from each other. In Warsaw this was evidential.

Poland’s capital is developping its green consciousness: While Oslo is promoting electro mobility to substitute fuel driven cars, Copenhagen is trying to become CO2 neutral within the next years and Zurich is minimizing its energy consumption, Warsaw is very committed in solving its basic challenges in urban planning and environmental standards.

One challenge is improving the water quality of the river Vistula. Although one the last nearly natural and almost uncontrolled running rivers in Europe, the Vistula is severly pollutet. Now Warsaw is enlarging and modernizing its waste water treatment plant in Czajka. From 2013 on the plant will treat the waste water from all households of Warsaw – and what’s even more: the sewage sludge will be used in a cogeneration plant to gain electricity and warmth. Hamburg is following the same principle - but in a much smaller scale within its harbour area (at Köhlbrandshöft). So this large scale project in Warsaw will become one of the most modern water treatment plants in all Europe and those responsible are rightly so very proud. So Czajka is one of Warsaw's two best practice examples we present in the exhibition.

Generally Warsaw is developping a new interest in its river: Right now a six lane road is blocking the Old Town from the river banks. „There are plans to relocate the traffic subterranean“, architect Ewa Badowska told me when she was visiting the exhibition. „But it’s only plans. Probably it will never happen because it is very expensive and there are so many basic things that have to be done in Warsaw“, she said.  „But the idea to open the city a bit more to the water is charming and the people start to discover their river.“ So the first cafes and eateries at the river bank have already started business.

Mrs. Badowska said that she was in Hamburg 30 years ago and so she was very much interested in the Hafencity, Hamburg’s newly built quarter alongside the river Elbe that contains a lot of very high tech orientated green buildings. Green architecture is one of the fields she’s working in – besides running a web site (www.zrownowazonebudownictwo.pl) on this topic and organizing discussion meetings with the Polish Ministry for Infrastructure. As an expert she says: „Interest in green issues and in sustainable cities still has to grow in Poland. But things are changing among the younger generations.“ Well, we can’t judge after only a few days - but  it’s true: we never had so many school kids in our exhibition like in Warsaw. Almost 50 classes came by during the five days our Train of Ideas was located next to the prominent Culture Palace!