Marseilles – a city captures the sun

Marseilles wants to become one of the main suppliers of solar power in France. Above all public buildings are gradually being equipped with solar systems.

The sun shines on an average of 300 days a year in Marseilles. The largest French port is using this potential for eco-friendly power production: In the port, most of the building roofs are now equipped with solar systems – this has already occurred on a total area of 100,000 square meters.  The city plans to install solar collectors on a further 160 public buildings such as schools and sports facilities. By the end of 2012 Marseilles will have equipped 150,000 square meters of roof area with solar systems – more than any other city in France. Electricity produced in this way covers the annual power needs of 7,000 households.

In the north of Marseilles, an almost 170-hectare eco-district is emerging with new residential and business premises, bike paths and green areas. Construction companies and builders have signed a quality charter for this district. They are committed, among other things, to using ecological materials and planning houses that save energy. Rain water is to be used to irrigate the green areas.

On thr road to the eco-city

In the long term, Marseilles is not only planning to implement an ecological district, but also to make the entire city greener. The project “Écocité” has already begun. Thus highway 55, which goes through Marseilles, was routed through a one-kilometer-long tunnel at a central section of the coast. As with the three planned highway covers in Hamburg, this will create new space for green areas and a better quality of life. 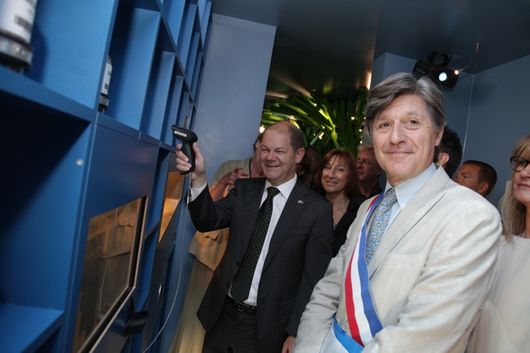 For more than 50 years Hamburg and Marseille are twin towns and linked in one of the oldest French-German Jumelages. But there's much more both cities have in common as we found out when arriving in Marseille.

"Both our towns are harbour towns and face similar challenges for the future" Hamburg's Mayor Olaf Scholz said in Marseille when he opened the Train of Ideas together with Marseille's Deputy Mayor Bernard Susini. "Just like Hamburg with the Hafencity, Marseille is developping a new quarter in it's old harbour area called EuroMediterranee."

Of course these are some of the most important similarities between both cities. But one thing was even more striking - at least when we arrived the day before the opening ceremony: Both towns can be extremely windy! Whereas Hamburg is notorious for its "stiff breeze", Marseille has "le Mistral", which made it feel like being inside a gigantic hairdryer when we arrived... "Yes, and this surplus of wind could be one of our opportunities for producing renewable energy", Emmanuel Luciani explained. The Marseille based architect visited our exhibition together with his girl friend Anne Michel and he was "impressed by the fact that Hamburg is one of Europe's renewable energy capitals." Indeed: Hamburg has a big cluster for renewables with hundreds of companies, institutions and research centers - and about 4.000 employees. "Marseille has a lot of chances to become a hotspot for wind energy and photovoltaic as well", Luciani says, "the natural resources are there, we just have to use them!"

And Marseille is beginning to do so: 100.000 square meters of roof tops are already covered with photovoltaic panels and many public buildings will follow. At the day of our opening the local newspaper La Provence reported that another 1.000 sqm were installed on L'école de Fourragère. So Marseille is coming closer to its goal of 150.000sqm until 2012 - which is more than in any other city in France.

"Another challenge in Marseille is the traffic", explains Anne Michel, who's also working as an architect. "This is why I liked this exhibit that showed how much public space is actually wasted for cars. Space, we could easily us for pedestrians, playgrounds and parks. The cities have been adapted to the need of cars and now we realize: this was a mistake." So one of Marseille's biggest projects is relocating parts of the coastal road which is now blocking the city from the Mediterranean Sea. As a part of the EuroMediterranee project you can see road works just beneath the beautiful Cathédrale da la Major and elsewhere on the shoreline.

So this is something we realized before: Many European harbour cities that we are visiting with our exhibtion are putting great efforts in waterfront projects. Whether it's Marseille, Barcelona, Oslo, Gothenborg, Malmö or Copenhagen - just like Hamburg they are all "re-discovering" their shorlines and transforming old industrial or harbour zones into livable new neigbourhoods. And many of these projects use green technology and follow the same basic ideas of sustainibility. Although their are (luckily!) still big differences in mentalities and culture, European cities often share the same goals when it comes to ecology. Now I'm really curious what the upcoming European Green Capital 2013 Nantes is planning. We will have the chance to see for ourselves in a few days: From July 7th to 10th our Train of Ideas will make its second stop in France.