Nantes – a city learns from its citizens

In 2013 Nantes will be Europe’s Green Capital. On the way to an ecological future, Nantes attributes a central role to cooperation between politicians and citizens. The “L’Atelier Climat” project is one example of this – it is running until June 2011 and will affect the city’s future environmental policy.

By 2025 Nantes wants to reduce greenhouse gas emissions by 50 percent. In order to achieve this ambitious target, the city is taking a route that is unique in France up to now: 150 households from the city are participating for one year in the so-called “L’Atelier Climat”. In regular training courses, they not only learn more about their own behavior, but also help develop the city’s climate strategy. The project is intended to make citizens aware of eco-friendly behavior. Additionally, a detailed evaluation takes place, for example via surveys distributed monthly and a determination of participants’ individual CO2 output. Based on these data, the city wants to develop measures and recommendations for its citizens, custom-made to their individual needs.

Public transportation instead of private car 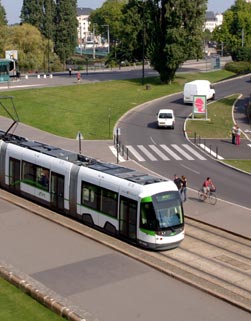 Nantes was the first city in France to reintroduce the streetcar in 1985. Today the streetcar network in the Loire city is the longest in the country at 42 kilometers. Ferries and buses round off the public transportation system. Nantes exemplifies the notion that economics and ecology are not mutually exclusive. The Atlantic metropolis ranks among the fastest-growing cities in France. The well-developed local transportation system has contributed to reducing car traffic in recent years. In 2009 Nantes received an EU award for its sustainable urban traffic. In Hamburg, passenger numbers on local public transportation are also rising. In 2011 the city is also increasing electric cars for car-sharing as well as hybrid buses. 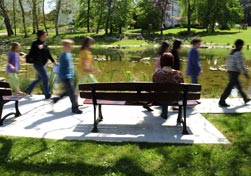 Green lung of the city

Quality of life and air quality are key elements of urban planning for Nantes. So no one needs to walk more than 300 meters to experience pesticide-free biodiversity, there are 57 square meters of green area per resident: 3,366 hectares in all. Since 2006, Nantes has also cultivated three city forests – by 2016 there will be 800 hectares of forest area in the northwest, southwest and southeast of the city. 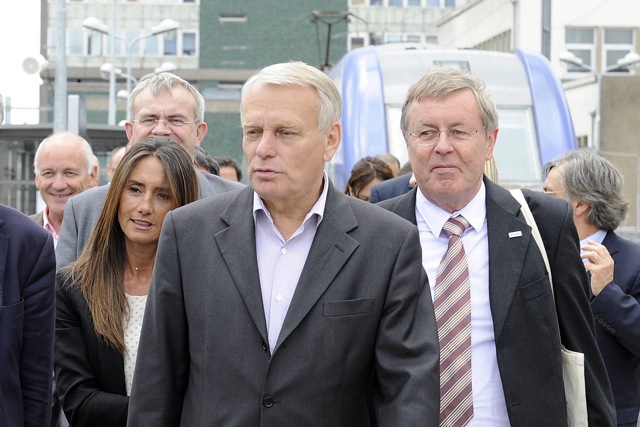 Nantes is going to be European Green Capital 2013, following the Basque town Vitoria-Gasteiz (2012) and Hamburg (2011). In Nantes all three Green Capitals came together when representatives of the cities visited the Train of Ideas.

"Congratulations Hamburg: This Train of Ideas is an excellent initiative", said Jean-Marc Ayrault, the Mayor of Nantes, during the opening ceremony of our exhibition in his town, which is going to be the next European Green Capital but one. And Idoia Garmendia, Deputy Mayor of Vitoria-Gasteiz, who visited the Train for the second time after Barcelona even announced that her city would be interested in taking over (parts of) the exhibtion for Vitoria's Green Capital campaign next year. Number three in the "European Capital Triangle" was Hamburg's Wilhem Schulte, Head of Urban Planning and Landscape Department.

All three representatives emphasized the importance of communication and of exchanging experiences and informations. In the case of Nantes this is even one their contributions to our exhibition: A "Climate Workshop" was held to evaluate basic informations about what the people in Nantes know about climate change and what they can do against it. 150 households are now taking part in testing out all kinds of measures. This is one of Nantes' focus points: saving CO2 emissions in private households, urban mobility and economy.

Therefore Nantes is taking great effort to promote public transport, cycling and its walkability. In 1985 Nantes was the first city in France to bring back its tram system (given up in the 50's) and recently invented a so called "busway": A separate lane for buses with higher platforms for an easier access, just looking like a stop for trams. This is actually what it's meant for: to be "upgraded" in a tram lane later. So the traffic planner already set the course anticipatory for a system change in the time being. Everywhere downtown you can see construction sites and signs explaining that this or that road is getting reconstructed to gain more space for pedestrians and green spaces. Thanks to the consequent traffic concept and an ambitiouse climate protection plan Nantes was already able to minimize its yearly CO2 emissions to 4,77 tons per capita.

Wilhelm Schulte was very much impressed by these projects - and also by the urban development on the Loire river isle Île de Nantes which reminded him of the Hafencity in Hamburg. Yes, this is true, but I was also reminscented of the Internationale Bauausstellung (IBA) on Hamburg's river isle Wilhelmsburg. In both projects it's about redevelopping and reshaping a poor, unstructured quarter that is dominated by high rise dwelling, seedy old buildings and industry. On both river isles old houses are getting refurbished, closed areas turn into open public spaces, barriers get eliminated and new architecture shapes lively places. So that was fascinating to see that some of the ideas we knew from Hamburg are followed in Nantes as well - or vice versa.

And of course it's fascinating to see and learn how Nantes and other cities manage their competitions in general. We had the occasion to visit and learn from 13 cities within the last 11 weeks. Today we are closing the exhibition in Nantes and come back to Hamburg for a summer break and will have to digest all those overwhelming impressions. I guess we all deserve a little break now: The whole team, myself and of course our Train of Ideas - as more than 30,000 visitors left their marks on the exhibits! But in six weeks the Train (and this Blog) will start again. Next stop: Paris on September 1st.