Paris – less traffic through common use of car and bike

Paris wants to reduce its CO2 emissions. While Orly Airport uses geothermal energy, giving up private cars is at the forefront of urban transport: Within a radius of a few hundred meters, everyone can find an entrance to the underground, a rental bike and, soon, a hire car. 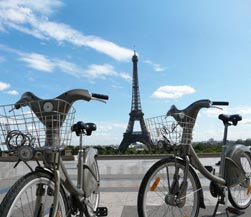 Every 300 meters a rental bike is available for taking a ride. The Paris bike rental project Vélib’ has been motivating residents and tourists since 2007 to use muscle power. It has been a success: Every day 50,000 to 90,000 people get around with rental bikes in the French capital. In the entire city and into the outlying districts approximately 20,000 bicycles are available at 1,800 renting stations. In this, Paris is a model for many European metropolises. In Hamburg, for instance, the project “StadtRad” has had more and more enthusiastic supporters since 2009. 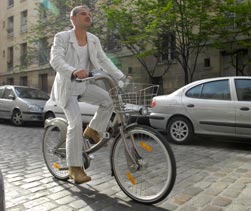 Every fourth Parisian is thinking about getting rid of their car because they use it only occasionally, can’t find parking or simply can’t afford it. For these occasional drivers, car-sharing is a practical, economical and above all eco-friendly alternative. In Paris preparations are underway for such a project with the name Autolib’. From fall this year, 3,500 to 5,000 electric cars will be available to drivers by the Seine.

Even Paris airports are committed to CO2 reduction. Paris Orly depends on renewable energy from the earth’s natural heat: Less than two kilometers under the airport is an enormous chamber of water at a heat of 75 degrees. The warmth derived from it covers approximately 30 percent of the airport’s heating needs. That corresponds to approximately 4,000 metric tons of crude oil and a CO2 saving of 9,000 metric tons per year. 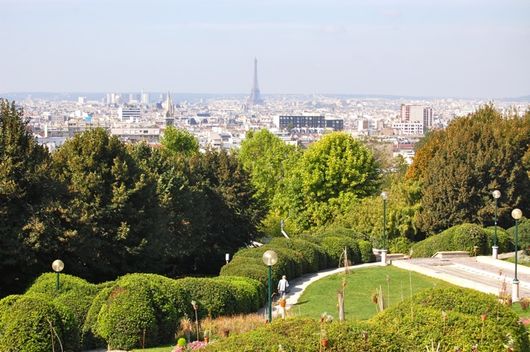 Paris – probably the best known city in the world. Famous for its iconic sights, buildings and boulevards, loved for its culture, cuisine and lifestyle. But not really known as a green city. This is about to change.

Back on track – after seven weeks of summer break the Train of Ideas is on it’s way through the European capitals again. And Paris is the perfect destination for starting the next étape: it is not only an outstanding city with obvious comforts and attractions but also a perfect example for the challenges a modern metropolis has to deal with.

Some of these challenges get immediately evident when arriving in Paris: Going there by train travellers from abroad usually arrive in Gare de l’Est – or one of the five other terminal stations, where the radial french railroad system starts (or ends). Also the national highways mostly head to Paris due to France's centralistic structure. Inside Paris these lines continue. The only link between all the roads heading radially towards the centre is the notoriously jammed ring road périphérique. This centralisms leads to some problems as François Gérard from the Parisian traffic group RATP pointed out at the Green Capital Challenge that was held in the context of the "Train of Ideas's" stay in Paris. "All metro lines are led radially, too. But we would rather need a polycentric system. So we plan a circular line as an important improvement."

Nevertheless the metro in Paris is a highly efficient means of transport already which offers 16 lines with 240 stations. Dietrich Hartmann, Managing Director of Hamburg's public transport association HVV was impressed and called the existing system "excellent" but he also stressed that Paris and Hamburg share a challenge for the future: Either system is facing a capacity bottleneck as some lines in Paris transport 750.000 passengers a day and the HVV saw an increase of 30% passengers within the last decade. Therefore both companies are expanding their lines and fleets and they improve the efficiency of the existing lines. In Paris for example the first metro line is now driven fully automatically without a driver and they are running every 2 minutes.

Still traffic is a major task for Paris with it's 2,2 million inhabitants (in it's borders - i.e. inside the périphérique). So steady modernisation of the public transport sector is paramount. But additionally Paris invented an excellent bike rental system in 2007 called Vélib, which turned out to become a major succes: About 100.000 people use the system every day! There are about 1.8000 rental stations offering 20.000 bikes. Within a couple of years bicycle use in Paris increased about 48% - mainly because of the ubiquitous Vélibs. "Vélib isn't only an ecological project", explained Denis Baupin, Deputy Mayor of Paris, who opened the "Train of Ideas" at the Gare d'Austerlitz last Thursday. "It's also a social project as it brings people back on the public space and turns inhabitants to citoyens."

This is true also for another Parisian project called "Main Verte" (= Green Hand): Backbone of this project are the jardins partagés, 67 shared gardens, which are made available by the city and used by more than 2.000 people. Neighbours, elderly people, school kids, people from all kinds of social background, who would usually not interact and talk to another are cultivating tomatos, salad or just flowers in otherwise unused lots. Claire Alexandre, project leader at the Parisian Department for Green Spaces & Environment, explains another meaning of the project during a panel discussion at the Goethe Institut: "The shared gardens come along with other measures that we take to make Paris greener and to connect the green spaces to a green framework."

Some of the these connections have become quite well known attractions like the "Promenade Planté" an old railroad that was turned into a green pathway spanning from the Bastille to the Bois de Vincennes - one of the two city forests in Paris. Other green axis' are getting developped using the shared gardens and public parks trying to encourage the residents to take care for some new plantings alongside the streets. Sometimes even small innovative ideas like placing a big bag with soil on the roadside and planting some flowers inside can have surprising effects. One of the reasons why Paris is so innovative in creating new green spaces and connections is probably that the city is very densly populated: the 2,2 million inhabitants live together on 105 km2 - in Hamburg 1,8 million people share 755 km2.