Like many parts of Belgium, Antwerp is frequently threatened by flooding. Green roofs are intended to store rain water and so lower the risk. 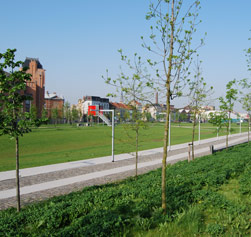 Starting this year, in Antwerp all new and renovated flat roofs must have greenery. This pays off several times over: First of all, plants on the roof improve insulation, reducing both energy consumption and the noise level in the buildings. Secondly, green roofs provide new habitats for plants and animals. Larger spaces also offer recreational space for people. And thirdly – and for Antwerp particularly importantly – plants store rain water. So they reduce the risk of flooding, which is comparatively high in the Belgian port.

Electricity from the landfill 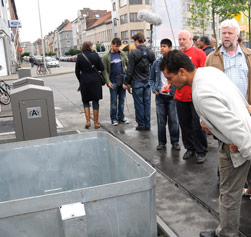 Antwerp has demonstrated in recent years how a landfill can be turned into a green power station. For a long time, Hooge Maey served as a waste dump for household and industrial waste. Now the methane gas that leaks out of the organic garbage is captured and used to generate electricity. In addition, contaminated water from the landfill is cleaned in a processing plant. Exactly as at Hamburg’s Georgswerder energy mountain, which also developed from an old landfill site, wind energy turbines are set to turn on Hooge Maey in the future. 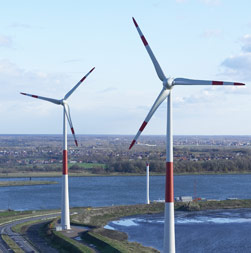 And yet another project reveals parallels between Antwerp and Hamburg: The park Spoor Noord connects neighborhoods which were separated by a railway site several years ago. Where trains once operated, neighborhood residents now play football or ride their bikes. The former railway buildings serve as cultural and sports facilities. Green urban development that has become the accepted thing: In Hamburg, enormous covers over highway 7 are intended to unite separate neighborhoods and create areas for local recreation. Traffic is to flow underneath on the developed highway. 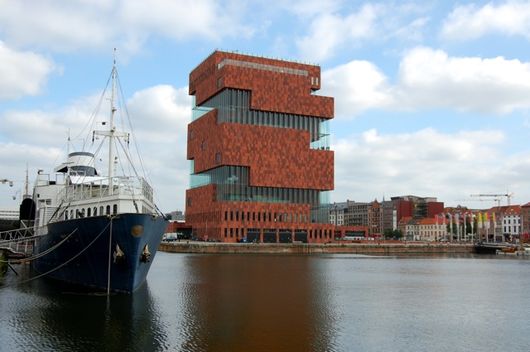 In April the Train of Ideas started its tour. 18.000 kilometers, 17 cities in 13 countries and 5 month later we reached our last stop abroad. And it turned out to be a very appropriate last stop indeed!

Antwerp takes some pride in a remarkable superlative. Many people told us independently from each other that Antwerp would have the "third most beautiful train station in the Europe". Well, I don't know the source of that ranking, but I can say for sure that among the 16 other cities where our Train of Ideas stopped there was no train station that impressive as in Antwerpen. So in our own ranking Antwerp is definetly no. 1!

But not only because of the imposing Antwerpen Centraal station, the city gives an excellent terminal point our grand tour. Antwerp has much more to offer. For good reason the Flemish town was one of the first European Capitals for Culture (1993) and hosts two UNESCO World Heritage sites. Well known for its cultural spirit and treasure box like architecture Antwerp is undertaking some serious steps to become also a green city - and applies for the title European Green Capital 2014.

If they succeed, the title wouldn't be the only similarity between Antwerp and Hamburg. Both cities are among the most important harbour towns in Europe, with harbours lying about 100km inland from the North Sea. As both harbours moved more towards the sea, substantial parts of the abandoned old harbour get give space for waterfront projects and brownfield development. In Hamurg it's the HafenCity and some projects of the Internationale Bauausstellung (IBA) andInternationale Gartenschau (igs) which are transforming the central harbour and industrial sites in the surroundings into new neighbourhoods and public green spaces.

In Antwerp it's the old dock area t'Eilandje that is undergoing a dramatic change. Many docks within the widespread harbour have lost their function and are now inner city's extension area. Some new inhabiters have already settled down: new homes, offices and cultural facilities have been built. Best known is the landmark building of the MAS (Museum ann de Stroom) an intentional reminiscent of stacked containers in the harbour. The MAS was opened earlier this year.

An important part of developing het Eilandje is the project Spoor Noord, an old railway area that is turned into an open green space, a park that is connecting parts of the town being separated for decades. Instead of a fenced off no-go-area people in Antwerpen's north now have play grounds, sports fields, picnic areas and even a new school. So this reminded me very much on the IBA and igs project of reshaping vast brownfield areas in Hamburg-Wilhelmsburg. Another project that sounds very familiar to us is the transformation of an old landfill: "Today Hooge Maey is an important green energy supplier", Guy Lauwers, Deputy Mayor of Antwerp said during the opening ceremony of the Train. "The methane gas is captured and used to provide electricity for an equivalent of more than 5.000 households." This is exactly the same principle followed in Hamburg-Wilhelmsburg too, where a waste hill became an energy hill.

"This is what it's all about", Serge de Gheldere said at the same occasion. "Cities learn from each other, exchange ideas. Hamburg and Antwerp are pioneers of a new green development. Other European cities like Stockholm, the European Green Capital of 2010, as well. This exchange could be the starting point of a green identity of European cities, a common identitity that distinguishes European cities from, let's say, American cities." Serge de Gheldere is one of six "Global Warming Presenters" personally trained by Al Gore to communicate his messages.

So it's not about competing on titles as "European Green Capital" or on which city came first with this or that idea but it's about learning and about adopting to find suitable solutions for each city. Or as Mr. de Ghelder put it: "It's about living in cities that are livable, green and climate protecting." This is good conclusion on our whole trip with the Train of Ideas. So next week we are coming back to Hamburg and the Train of Ideas will be loaded with many excellent new ideas and the spirit of exchange.